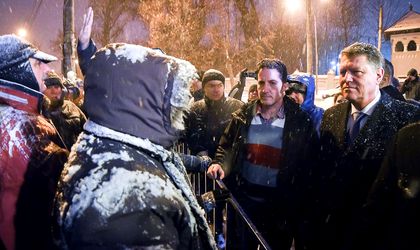 Romanian president Klaus Iohannis attempted on Wednesday evening to talk to a group of people that were calling for his resignation, despite the blizzard that had engulfed Bucharest. The head of state spent a few minutes in the crowd, but the protesters continued to tell him to step down. He was not able to say too much as the angry group of more than 100 shouted at him to resign.

Iohannis took to Facebook after the meeting to say that it’s his duty to “listen to the voice of all Romanians, no matter what their options are.”

Meanwhile, at Victoriei Square, around 5,000 people rallied for the ninth night in a row and called for the resignation of the government led by Sorin Grindeanu.

It was for the second time that Iohannis went among the protesters. In late January, when the protests in Bucharest were in the early stages, the head of state made a surprise appearance at a rally held in the center of the city, saying it was inadmissible that a group of politicians with legal issues was trying to change the penal legislation.

Since then, the government approved a controversial ordinance that would partially decriminalize the abuse in office that sparked public outrage, but later backed down and repealed these changes. However, the people that have continued to swarm the streets of the main cities say they can’t trust this government anymore.

However, the ruling coalition comprising the Social Democratic Party (PSD) and the Alliance of Liberals and Democrats (ALDE) said they would continue to support Grindeanu’s government.

On Wednesday, the government survived a no confidence motion issued by the opposition parties.

Going forward, more details should emerge about a referendum on Romania’s anti-corruption efforts that was announced last month by president Iohannis. The head of the Chamber of Deputies, Liviu Dragnea, who is also the PSD president, suggested that the Parliament would approve this referendum.