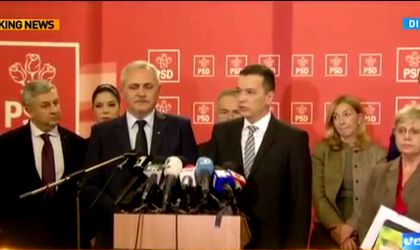 The PM-designate Sorin Grindeanu announced on Tuesday afternoon the proposed list of 26 ministers in the new government that will have to receive the vote of MPs in a meeting scheduled for Wednesday.

According to the proposed government structure, both Sevil Shhaideh, who was rejected by president Klaus Iohannis as PM-designate, and Daniel Constantin will hold the role of deputy PM.

People to watch in the new PSD-ALDE government

The social democrats have 22 ministers, while the rest come from the Alliance of Liberals and Democrats (ALDE), the political allies of PSD. The proposed government is political and does not include any technocratic officials.

“I understand my role very well: we are a political government, but the politics is done elsewhere. We will be in government to administer the country,” said Grindeanu in a press conference.

The specialized committees in Parliament will hold hearings with the prop.osed ministers and the final vote in Parliament should take place tomorrow. The PM-designate wants to hold the first meeting of the new government this week if his cabinet gets the favorable vote of MPs