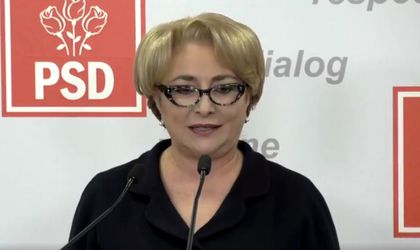 The Parliament voted on Monday for the appointment of a new government that will be led by Viorica Dancila who will be the first woman in history to hold the top job at Victoriei Palace.

There were 282 votes for the new government, 136 against and one abstention.

The new government will have four deputy PMs, out of which three hold minister positions.

In a speech before the vote, Dancila said that she was ready to work with all the political forces and the president of Romania “to generate a consensus on the major topics of the country referring to the national interest”. She cited the celebration of the Centennial and the preparation of the rotating presidency of the EU Council as the two topics for which political collaboration is required.

Speaking about her policy priorities, Dancila said that no new tax will be enforced during her mandate. She added that the Form 600 will be scrapped – this form had to be submitted by individuals reporting income from independent activities.

“Aside from the IT development, taking into account the reduction of the red tape by cutting the fiscal system, more exactly by reducing or merging the number of taxes paid by firms and citizens,” said Dancila.

The center-left coalition PSD-ALDE proposed Dancila as PM after it moved to withdraw the political support for Mihai Tudose, who resigned shortly after. The ruling coalition has changed two PMs in one year. In the case of Sorin Grindeanu, the PSD leadership said that he had poor results in government, while for Tudose, the social-democrats cited the conflicts that he had with certain ministers backed by the PSD.