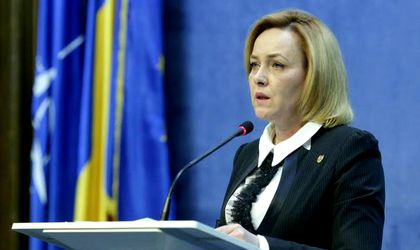 Carmen Dan, who has been Romania’s Internal Affairs minister since January 2017, having kept the role in three consecutive governments, has announced her resignation after a discussion with PM Viorica Dancila.

Sources cited by Europa Libera say that PM Dancila will appoint senator Nicolae Moga to replace Carmen Dan at the Internal Affairs Ministry (MAI). Asked about her successor, Carmen Dan said:
“I don’t know whether it’s been decided yet, but I wish success to my colleague, senator Moga.”

“We also talked about the pressure from the street. It didn’t bother us for a year, but it’s bothering us now,” Carmen Dan said in a sarcastic tone on Monday, referring to civil society calls for her resignation due to the violent intervention by law enforcement during street protests in August 2018.

Carmen Dan was a known ally of former PSD leader Liviu Dragnea, who is now in prison. Since she took over the PSD president role, Viorica Dancila has removed several of Dragnea’s close allies from key roles in the party.

Her resignation comes in the context of an upcoming government reshuffle announced by PM Dancila, who has not yet announced the names of all the ministers who would be replaced, but Carmen Dan had been one of the rumoured targets, along with Foreign Affairs minister Teodor Melescanu. The leaders of the Social Democratic Party (PSD) are meeting on Monday to make the final decisions for the reshuffle.