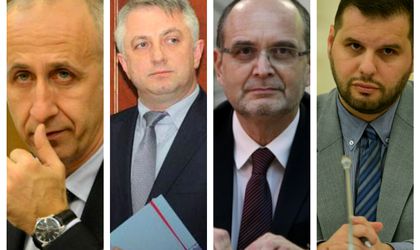 The Romanian PM Dacian Ciolos announced Tuesday evening that he decided to replace four ministers from the technocratic government, citing the poor performance of these people.

Ciolos has also mentioned the nominations he has made for these positions.

Mircea Dumitru, the rector of the University of Bucharest, was proposed as the new minister of education. At the Ministry of Transport, Ciolos has nominated former Renault executive Sorin Buse. He has overseen the creation of Renault’s R&D facilities in the country and was the head of Renault Techologie Roumaine.

At the Ministry of Relations with Romanians Abroad, the PM has proposed Maria Ligor, the current Romanian ambassador to Canada.

The current chief of staff of the government Dragos Tudorache was proposed as interim minister of communications.

Ciolos said in a press conference, where he announced the changes in the government’s structure, that he wanted a “new impetus” from the officials.

“The priority of the new ministers will be to accelerate the delivery of results for projects that have already been started and which haven’t advanced that fast,” said Ciolos at the Victoria Palace.

The PM added that for the transport portfolio, the development of highway projects has been lagging behind and that new infrastructure projects should emerge fast.

Ciolos underlined the fact that the government should do more to help Romanians return home from abroad.

At the Ministry of Education, the PM said that progress was registered in the research area, but that more had to be done to tackle the issue of plagiarism in universities.

The head of government said that president Klaus Iohannis knew about his intention to fire some ministers, suggesting the head of state was OK with his plan.