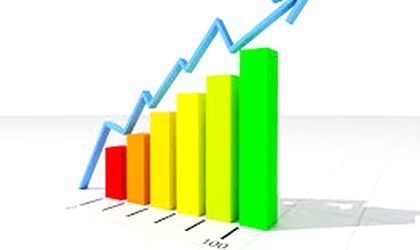 Romania’s Gross Domestic Product (GDP), the index widely used to measure the size of national economies, recorded a growth of 7 pct in 2017 in real terms, to RON 856.35 billion (EUR 187.5 billion), according to National Institute of Statistics (INS) data released on Wednesday.

Romania’s economy rose 6.9 percent in fourth quarter of 2017, according to INS.

The growth rate recorded in 2017 is the highest since 2008 for Romania and is due mainly to government-led increase in households consumption.

INS data show that household final consumption expenditure, the index measuring what people – acting either individually or collectively – spend on goods and services to satisfy their needs and wants, rose 10.3 in 2017 compared to the previous year.

Many economysts insist Romania should change the economic model in order to obtain real long-term economic and social development.

The impressive GDP growth rate recorded in 2017 was mainly due to the increase in agricultural production, with 18.3 percent compared to 2016, in information and communications sector (+10.9 pct), in professional, scientific and technical activities (+9.9 pct) and in wholesale and retail, repair of vehicles, transport, storage hotels and restaurants (+8.4 pct).

Construction was the only sector in Romania which declined in 2017, with 0.3 percent compared to the previous year.

Official data released on Wednesday confirm Romania’s GDP was larger in 2017 than Greece’s GDP, estimated at around EUR 175 billion, for the first time since the 1970s.

But Romania is still the second-poorest EU country if we look at the more relevant GDP/capita index, with less than EUR 10,000 per inhabitant in 2017.