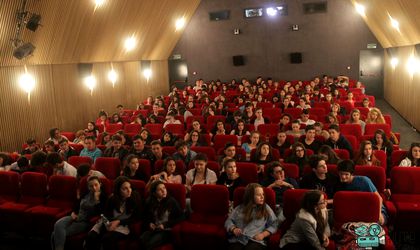 More than 15,000 high school students and teachers have participated in a Swiss-Romanian cultural program, according to the organizers. Films for Teens, a collaboration between the local Macondo Cultural Association and Swiss organization The Magic Lantern, is described as one of the biggest cinema education programs rolled out in Romania.

Participants, who came from 90 high schools in 14 cities, watched six contemporary art films over 2015-2016, which were followed by debates, in various cinemas and cultural spaces.

The program also included eight cinema lessons given in collaboration with The Magic Lantern, on such subjects as: a short history of cinema, film genres, documentary and fiction, planet cinema, women in cinema, cinema language and animation.  The teachers involved in the program took part in six workshops led by Romanian film critic and cinema educator, Ileana Bîrsan.

The program had support from the Romanian Ministry of Education and other state institutions. It received funding from the Swiss Contribution to the enlarged European Union, as well as the partners.

The Magic Lantern is an international film club founded in Switzerland, which has been developing educational activities for children for more than 20 years. The Macondo Cultural Association, founded by Daniela Bacanu in 2007, aims to increase the level of local film education, promote art and independent films, increase media literacy, develop innovative cultural projects and support young filmmakers and art enthusiasts.

Romania has the fewest cinema goers in the European Union.