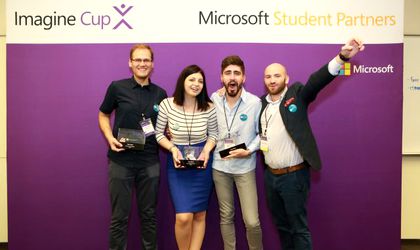 Three Romanian students won the grand prize at this year’s Microsoft Imagine Cup Championship, the global technology competition supported by the IT giant.

The team of Romanians had already won in the innovation category with their app called ENTy and moved in the finals, where they faced other two teams of students  – Team PH21 of Thailand and Team AMANDA of Greece. There were 35 teams that had qualified for the final leg of this competition.

The team from Thailand had developed a stealth puzzle game, while the Greek students built an anti-bullying app that leverages virtual reality.

Flavia Oprea, product developer of ENTy, said after the final that took place on Friday evening in Seattle: “Follow your dream. Don’t listen too much to the negative advice.”

ENTy is an app for monitoring balance and posture that has already been tested with the help of doctors on real patients.

The students have secured a USD 50,000 grant from Microsoft and won a mentoring session with Satya Nadella, the CEO of the IT company.

The trio of judges that helped decide this year’s winner of the Imagine Cup were Dr. Jennifer Tang, one-half of the duo that won the 2014 Imagine Cup Championship and Kasey Champion, an accomplished software engineer and Computer Science Curriculum Developer at Microsoft. The special guest judge was John Boyega, lead actor from Star Wars: The Force Awakens.