Romanian shoppers, willing to spend more for FMCG products in 2015 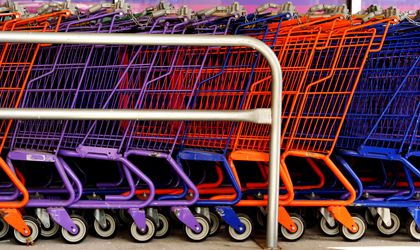 Romanian shoppers have changed their behavior compared to previous years, GfK shows, shopping less often, but spending more each time they do, according to the GfK household panel. A tendency for uptrading has appeared for the first time in three years, meaning Romanian shoppers choose the premium version of a product in the same category.

The study which monitors household consumption showed an increase in value by 1.5 percent for FMCG products in 2015 over the previous year, stimulated by fiscal changes.

The increase in pensions, salaries in education and health, and the average income, added to a reduction in VAT on food led to an increase in purchasing power and public confidence, with purchased volumes going up by 4 percent over the previous year.

“The decrease in the frequency of purchase and the fact that Romanian shoppers allow themselves to choose more expensive products indicate a relaxation in their shopping. They no longer take so strictly to their shopping list as they did before and, even if they are still looking for good prices, the tendency to buy as cheap as possible seems to be diminished,” says Raluca Raschip, consumer goods and retail director, GfK Romania.

In terms of volumes, food still holds a large share, at about two thirds of the annual shopping cart. When looking at value increase, drinks take the lead. Other product categories that have changed compared to 2014 are packaged foods, for which prices fell, and personal and home care, which recorded growth.

The GfK household panel monitored 3,000 households during 2015, a representative sample at national level. Present locally since 1992, GfK Romania registered a turnover of EUR 16.2 million in 2014.