Romanian president pays homage to Colectiv club fire victims: “I would have liked after one year to know who is guilty for this terrible accident” 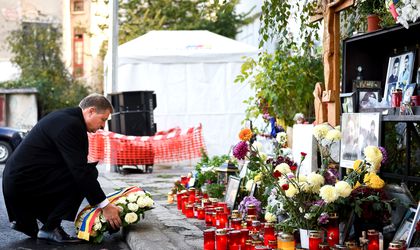 One year after the deadly fire in the Bucharest-based nightclub Colectiv, which killed 64 people, president Klaus Iohannis arrived on Sunday morning outside the building which housed the club to pay his homage to the victims.

A special sermon for the victims and their families would be organized later today at the church within Cotroceni Palace.

“We have the duty to not forget this tragedy, we have the duty to commemorate it, and not forget those who, innocent, died here at Colectiv. But, in the same time, it is our duty to do everything that we can for those that were here and survived. (…) If one year later we draw the line, we see that some things have changed for the better. The assessments are clearer and more numerous in such locations where events take place. There are clearer procedures in a series of areas. (…) I would have liked after one year to know who is guilty for this terrible accident. The society has changed and people have become more aware,” said Iohannis.

According to the head of state, there are 128 people that still need some kind of assistance following the fire, be it medical treatment or counselling.

The president underlined the fact that those political forces that have understood the message of the people following the club fire will “probably have a better position in the election.” He added that those who didn’t get the message will “get wiped” from the public scene.

Several investigations have been opened following the fire. For instance, two employees from the fire emergency service that checked the club before the tragedy were put on trial for failing to mention the fact that the nightclub did not have its papers in order. In a separate case, the former mayor of District 4, Cristian Popescu Piedone, is tried in connection to this case, alongside other public sector employees. The three owners of the club are also tried and the victims have claimed more than EUR 200 million in damages.

According to media reports, out of the 64 people that were killed due to the fire, 27 succumbed to their wounds in the same night when the tragedy took place. The rest died in hospitals from Romania and abroad, and in some cases the media reported that the victims got infections in local hospitals that further worsened their recovery outlook.

Days after the fire, massive street protests erupted across Romania, leading to the resignation of the PM Victor Ponta and his cabinet.

Prosecutors said the club was engulfed in flames due to a fireworks system that shouldn’t have been used indoors.

There weren’t enough exit doors or fire extinguishers in the club, which was located in the basement of a former shoe factory.