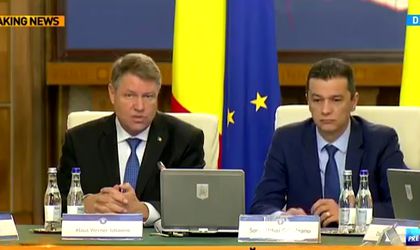 President Klaus Iohannis attended the government meeting on Wednesday and asked PM Sorin Grindeanu to make sure that the controversial pardon draft bill and certain proposed amendments to the Penal Code are discussed in a transparent manner before their potential approval.

Iohannis had warned earlier this year that the any bill regarding the amnesty and pardon of certain categories of detainees would dent Romania’s democracy and harm its rule of law. He added that Romania’s ongoing anti-corruption efforts would also take a hit.

Addressing the cabinet formed by the center left coalition of PSD-ALDE, Iohannis said that the were two “elephants in the room”, referring to the two draft bills that were supposed to get on today’s Government agenda for approval.

“Of course that I discussed with the PM earlier this morning, and he told me that he had already discussed with certain colleagues in the government and the bills regarding the pardon and the change of the codes will not be included on the additional government agenda,” said Iohannis. He added that it was agreed that the two draft bills would be be put on the agenda “over night” and that certain discussions would be held with the minister of Justice, Florin Iordache, and with the ministers of Interior and EU Affairs.

“To be put in transparency,” said the head of the state.

Iordache said earlier this week that he would favor the pardon draft bill, but not the amnesty. The draft bills have been criticized by the political opposition.