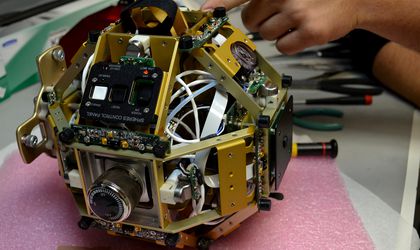 Four Romanian students enrolled at several high schools in Timisoara who qualified for the final of a robotics competition organized by the NASA and the European Space Agency said they cannot attend the event due to lack of money for transport and accommodation.

According to a press statement released on Sunday by the Timis County School Inspectorate, the heRObotics team of the Carmen Sylva Pedagogic High School, which includes four students enrolled at top Timisoara high schools, participated between September – December 2016 in the final of the Zero Robotics International Competition.

Team members include Silaghi Fineas, Ciuleanu Vlad Mihai, Candreanu David and Prodaniuc Pavel. The team, which was ranked 6th among the 14 finalists of the Zero Robotics competition, which focuses on the programming of SPHERES robots, experimental satellites aboard the International Space Station. The four students and their coordinator have been invited to participate in the finals, but the costs of bringing the team to the US are very high.

“Through this project, the access to the MIT (Massachusetts Institute of Technology), including to the SpaceLaboratories, as well as lunch in the day of the event are covered, The team must cover transportation, accommodation and food costs for the rest of their stay, as well as expenses for obtaining the US visa. The amount for the MIT-Boston (Cambridge USA, Massachusetts) goes up to USD 6,400 (including Romania-USA transport – USD 5000; food- USD 600; accommodation – USD 500; USD 300 local transport). Supposing we will identify people of good will that can contribute to the preparation and improvement of gifted young people, ambassadors of Romania at a global level, we will intensify our efforts to identify local sponsors and not only,” a the press statement by Aura Danielescu, Timis Chef Inspector.

The final of the Zero Robotics International Competition will take place on 27 January 2017 in Massachusetts, USA. The competition gathers high school students in North America, Europe and Australia, and focuses on programming of SPHERES robots, experimental satellites, located aboard the International Space Agency.

The competition if organized every year by the NASA in collaboration with the ESTEC centre of the European Space Agency and the MIT.