Romanian creatives in the UK | Nastase (Poke): “Clients have told me London and the UK care about strategy and craft” 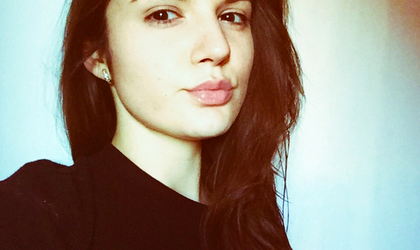 Young, but very experienced and determined. She is a strategist who’s been around the industry for seven years now. Her job revolves around creating, defining and implementing digital experiences, but she is also very interested in knowing everything about apps, websites and services. Andreea Nastase, strategist at Poke in London, talked to BR about her experience in the UK market.

I left Romania back in 2007 to pursue my studies in the UK. The main motivation was the fact that I didn’t think I could study the subject I was interested in over in Bucharest, or indeed anywhere else in Europe. At the time I felt closer to the UK’s culture as opposed to Romania’s, and I wanted to experience a place that was more meritocratic and had fewer hurdles in the way for young graduates.
What made you make the leap from copywriting to strategy?

Strategy was something I always had an interest in, but I was told (rightly so) that I was too young to be a strategist (pre-2007, when I turned 18). You need to have more life and career experience to understand business and consumer problems intimately. Some people go into client services first and then strategy – I went into creative first, and then moved on.

The biggest change for me was in professionalism and due diligence on projects. Of course this is a notion that keeps changing even here, but compared to Romania, people care more about process, documenting and recording things, and the way projects or actions are carried out and communicated more broadly.

How have you chosen the first agency?

My first agency in the UK, TBWA\Manchester, was a place where I only held an internship position; I went there because I was keen to work with their head of strategy at the time, someone who came highly recommended by other people in the industry and who had immense patience to teach me what I needed to learn at the time.

The second, “official first job” one, chose me more or less after attending a networking event and some interviewing for a newly-created role in a totally new department. They were looking for people interested in digital, and it was a case of the right person at the right time in the right team.

Gaining experience takes a long time – the main challenge was getting to work on projects that were significant to the agency and also gave me exposure to how clients operated. When you’re junior it’s easy to be left out of crucial meetings, so you more or less have to politely harass people to keep you in the loop.

What are the campaigns that you are more proud of and why?

On a sheer size and scale it would have to be working on a UBS global brand relaunch. It was a joint agency effort of which my current agency (Poke) was a part of but it was a monster of a task in terms of coordination and planning. It took about two years to plan and bring to life but when it did, we started seeing it in airports everywhere and people were doing things off the back of it. That feeling of ‘actual people responding to something I made’ never gets old.

Having experienced it for a few years, I’d say incredibly diverse and specialized. I think Ștefan in a previous interview already explained how many niches there are, and how you need to pick a ‘thing’ to own in order to survive and differentiate. Our advertising is still quite heavily influenced by TV though I’m glad that we are home to some of the best digital agencies and even production houses in the world (e.g. The Mill, Framestore, etc.) – without which the advertising scene wouldn’t be what it is today.

What are the most important lessons the London advertising scene has taught you so far?

I think this is the toughest question – it taught me how much relationships matter (in terms of creating and maintaining them), how important it is to stay professional in all kinds of situations, and how crucial ongoing education and a rich cultural life are to your success in this world.

I’ve considered Romania, but I don’t think that’s likely to happen. Having worked more in digital (by which I mean apps and services, not social media) and less in traditional advertising I’ve thought about moving to a place where apps and technology play a much bigger part.

Have you ever been tempted in those 9 years of London to change the country, maybe for New York, let’s say or other international advertising capital?

Funny thing about it is I never considered New York or anywhere else in these nine years. In my limited experience of New York it seems a far more media-oriented industry than ours. Clients have told me London and the UK care about strategy and craft, partly because they originated here in JWT and BMP. In New York and the USA I’d say there’s a much bigger emphasis on clarity of message and its wide distribution.

Their wit and sense of humor, and their resilience in the face of adversity – though both can also be your downfall.

Relationships with peers and seniors were a lot less formal and a lot more casual, partly because the industry was so small and people were likely to be friends before they even started working together.

I lead the Garnier account over here and I work for a commercial property scheme in East London called Here East. I’m still working on UBS (three years later) but less than I used to; there’s only so much banking one can take before a change is needed.

What are the main differences of working for an independent agency versus a multinational one in London?

Actually Poke still feels like an independent agency in terms of its culture, despite being in a very large group. Our processes and ways of working have changed substantially, but the kinds of people we hire and gravitate towards haven’t. You still feel like you’re the challenger who has to fight really hard to prove your worth!

What advice would you give to an advertising professional wanting to move to London? But to someone who is just at the beginning of its advertising career, with minimum experience in Romania?

To the first, I would say that it’s never too late if you have a very good reason and a plan. You have to at least know if you’d like to stay here and (re-)build your life or if you want to go back at some point. People tend to start families a lot later than everyone in Romania is used to (e.g. kids around or after 30), and all of your relationships will be governed by these forces.

To those starting out, I would say the same thing my partner (a lead designer for a startup based in San Francisco) advised people starting out in design at a conference in Timisoara last year: seek out experiences outside of your home town and country. Email people with questions and curiosity, and offer them something in return. Travel as much as possible and try to at least work somewhere for a while to get a feel for how things are done. You might like it, you might not. You won’t know until you’ve tried.

She started her career as an intern copywriter at Tempo Advertising in 2005 and six months later became a junior copywriter at Leo Burnett & Target Bucharest. In September 2008, Andreea Nastase left Romania for the UK and became marketing assistant/ student ambassador at Manchester Metropolitan University, a year later starting her first job in the UK advertising scene: intern planner at TBWA\ Manchester. A couple of months later she moved to JWT Manchester, in the position of junior digital planner. In July 2012 she moved again, this time to London, in order to be a strategist at London Strategy Unit. In 2013 she created and distributed the Strategist’s Handbook, a handbook full of advice for young strategists starting out in the industry. It sold 1,000 copies and went to over 20 countries. Also that year, she organized and ran a two-day training course for junior strategists. Over 50 people attended the sold-out event. Speakers included Russell Davies (GDS), Andy Nairn (Lucky Generals), Nick Morris (Canvas8), Matt Ward (Goldsmiths) and Nick Grime (LIZH).