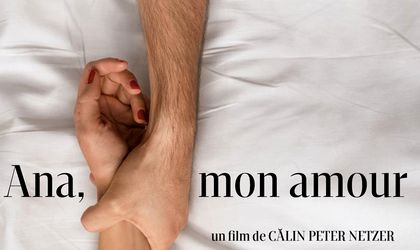 Calin Peter Netzer’s Ana, mon amour, which had its world premiere at the Berlinale was one of the most appreciated films at this year’s edition of the festival. “Netzer presents the tumultuous decade in an intriguingly non-linear manner, shuffling between the beginning, middle and end of their coupledom with carefree abandon, as if he had thrown a bunch of puzzle pieces in the air and let them fall where may. Sadly for him but helpful for us, Toma starts going bald at a tender young age, and we are often only able to orient ourselves in the narrative by counting the amount of hair on his head,” notes IndieWire.

Screen Daily says that “Romanian cinema takes a decidedly Bergmanesque turn with Ana, Mon Amour, an intellectually complex, emotionally harrowing dissection of the travails of a long-term relationship. Structured jigsaw-style in a series of non-chronological fragments, and featuring terrific performances from leads Mircea Postelnicu and Diana Cavallioti, Ana, Mon Amour is a jump into the realm of intimate psychology from the director of Child’s Pose, the Berlin Golden Bear winner in 2013. The film’s construction is precisely managed, so that enigmas form and are resolved in a highly fluid, organic way.This formally and dramatically ambitious work could well see Netzer repeat that coup, but there’s no doubt that the film will impress wherever there is an audience for substantial, highly adult cinema.”

Ana, mon amour will be on the national silver screens starting March 3. Calin Peter Netzer’s latest movie, Ana, mon amour, starring Mircea Postelnicu, Diana Cavallioti and Carmen Tanase, among others, tells the story of Toma and Ana, who meet as students at Literature College and quickly fall in love. But Ana’s mental illness imperils their relationship.