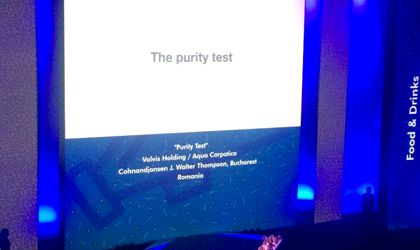 Romania won a gold, two silvers and a bronze Lion at Cannes at the PR Gala. The Gold Lion went to the agency CohnandJansen JWT for the “Purity Test” campaign and it represents the agency’s first Cannes Lion.

McCann and Publicis got one silver each, for the “Pay with Blood” (for UNTOLD Festival) campaign and, respectively, “Bernie Speed Test” (for Arcub Bucharest) campaign. The bronze went to the popular “Bittersweet Pies”, the campaign for Paul Restaurants by McCann / MRM.

So far, Romania has a total of 7 trophies: 1 gold, 3 silver, 3 bronze. Agency wise, CohnandJansen JWT has a gold, McCann Bucharest has 3 bronzes and a silver, while Publicis has 2 silvers. There are no further shortlists announced today, but tonight we’ll find out if any of yesterday’s 7 nominations, in Creative Data and Media, turn into trophies.

Our hopes for trophies is not over as tonight we will find out if one or some of the 7 nominations (5 by McCann Bucharest and 2 by Publicis Romania), in Creative Data and Media, will pay off.

In the Creative Data/ Data Storytelling and Media/ Use of Ambient Media: Small Scale McCann is once again nominated for PAUL – “Bittersweet pies”. “Brave Cut”, another McCann Bucharest campaign, created for Fundatia Renasterea is nominated at Media/ Use of Co-Creation & User Generated Content.

Their list of nominations continues with the UNTOLD – “Pay with Blood” campaign that has received another two shortlists at Media/ Use of Ambient Media: Small Scale and Media/ Use of Events.

Publicis Romania continues the nominations’ list with the campaign for Carrefour – “Shop like Jedi”, in the Media category, at “Use of Screens” and “Retail, e-Commerce, Restaurants & Fast Food Chains”.

Awards at the PR Gala: