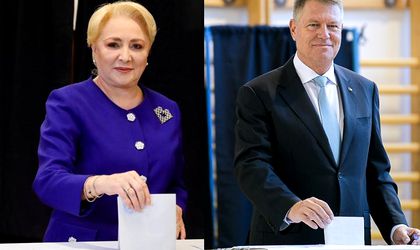 Romanians voted to elect their next president on Sunday, and while citizens living abroad set a historic record in their huge turnout, only 46.66 percent of those inside the country came out to the polls, which meant that this election was the presidential election with the lowest domestic turnout of the past 30 years.

The 2014 first presidential election round had a 52.31 percent turnout, while this year’s European Parliament election reached a total turnout of 49.02 percent.

With most votes counted, PSD leader and former PM Viorica Dancila has been confirmed in a comfortable second place, with over 22 percent, while USR-PLUS’s Dan Barna was lagging behind with less than 15 percent.

Partial results from Permanent Electoral Authority (AEP), with over 99 percent of votes in Romania and abroad counted:

One of the biggest takeaways from the first round of presidential elections was the huge turnout abroad: over 660,000 Romanian citizens voted outside the country, most in Italy, the UK and Germany. This was made possible by the 3-day vote and the number of voting sections across the world, which was almost double than in the previous election. The last record in the diaspora had been set in the May 26 European Parliament election: 384,943 people managed to vote abroad that day, amid a huge scandal caused by long lines and bad planning, which left many unable to cast their votes.

Notably, there were almost 1.5 million more votes cast in urban areas than rural areas in Romania; usually, there is a higher share of rural votes in presidential elections.