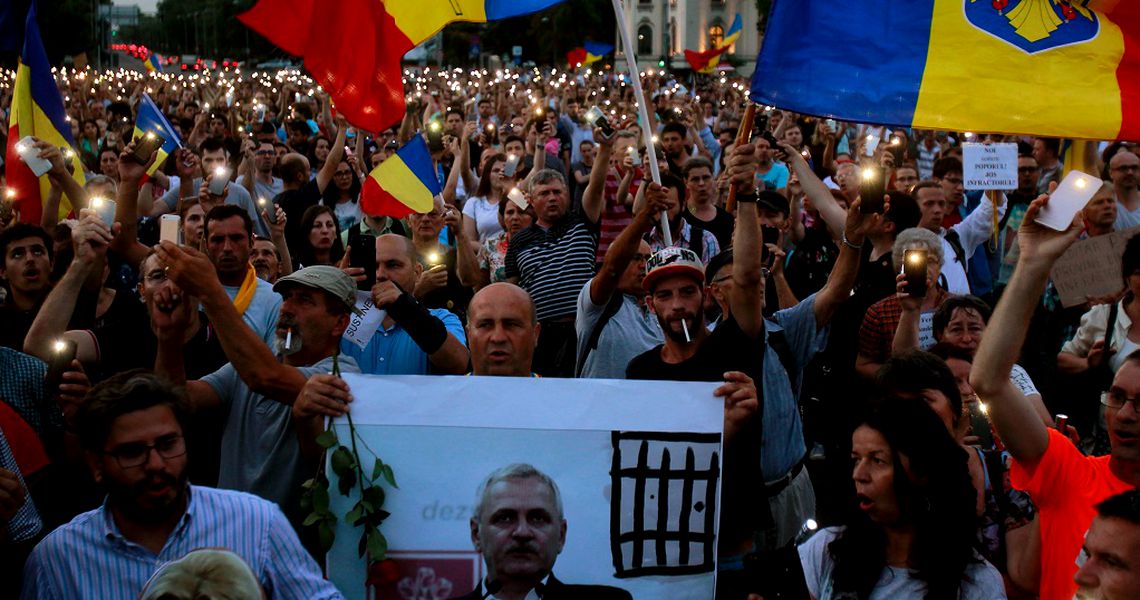 Social Democratic Party (PSD) president Liviu Dragnea, seen as the most powerful man in Romanian politics and the de facto leader of the government, has been convicted to three and a half years in prison last week after being found guilty of instigating abuse in office at the Child Protective Services Agency in his home county of Teleorman, and his conviction has the country split in two: those who support him claim that the case was built on an unconstitutional law article, while opponents say that he and his close allies are desperately trying to change fundamental justice laws in order to keep him – and possibly themselves – out of prison. The ruling is not final and the appeal could take another six months.

The opposition has prepared a no confidence motion against the current government, which will be read today in the Parliament. MPs will cast their vote on the motion on Wednesday, but it is not expected to be successful as the opposition won’t be able to gather enough votes, unless Dragnea’s allies decide to turn against him. The motion has been signed by 152 MPs, but it needs 233 votes in order to pass.

The government led by Viorica Dancila is the third supported by the PSD-ALDE coalition since the legislative elections of 2016, after former prime ministers Sorin Grindeanu and Mihai Tudose had fundamental disagreements with Liviu Dragnea and other party leaders and were removed from power – while Grindeanu tried to resist and was taken down through a no confidence motion submitted by his own party, Tudose simply resigned.

Despite the apparent strength of the PSD-ALDE coalition, there might be disagreements between its leaders regarding the manner in which the justice laws should be passed. ALDE president and Senate speaker Calin Popescu Tariceanu said earlier today that under no circumstance will the criminal codes be changed through an Emergency Ordinance by the government, the biggest fear of opposition parties and critics of the PSD. “We will follow the parliamentary debate procedure exclusively,” Tariceanu said.

PSD leaders held an emergency meeting on Friday after Liviu Dragnea’s jail sentence was announced. As he came out of the meeting, Dragnea said that the coalition’s “procedurally correct approach” for changing the Criminal Code in the Parliament “turned out to be wrong, because we can no longer speak of adopting it in a normal procedure in the Parliament. Any law, the Sovereign Fund, other economic laws, justice laws, they are all attacked, sent back, all in an attempt to destroy PSD.” He also added that he will remain at the top of the party and in his position as speaker of the lower house, and that he and his colleagues have decided “to be much stronger and more radical.”

Frequent protests related to planned changes to justice laws have been taking place in the past few months, but they have escalated in the past two weeks as the controversial legislative changes progressed in the Parliament and the Supreme Court’s sentence in Dragnea’s case approached. Members of opposition party USR have been calling for a large, disruptive protest on Wednesday, when the Parliament will cast the vote on the no confidence motion submitted by the Liberal Party.

EU Justice Commissioner Vera Jourova said for Business Review that the European Commission has confidence in the Romanian  judiciary and recalls that criticism against the judiciary remains a problematic feature in the public debate in the country. “It is essential to let justice follow its course and to respect judicial independence, as we have stated clearly in our latest CVM report,” she added.

Rising political tensions have already had major effects in the domestic financial market. Romania’s three month money market rate (ROBOR), the main indicator that sets the interest rates for RON currency borrowers, jumped on Monday to a record high of the last four years and one month of 3.13 percent. The ROBOR 3M calculated for June 25, 2018, is the highest since May 7, 2014. Last week, Romania’s currency, RON, reached an all-time low against the European single currency, the exchange rate rising to 4.6695/EUR on Thursday.