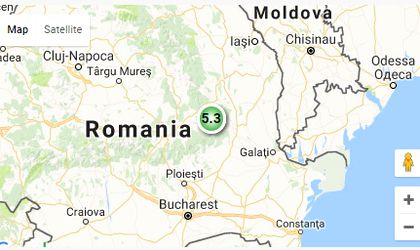 Romania was struck by an earthquake with a magnitude of 5.3 of Saturday morning, at 2.11 AM, according to the National Institute for Earth Physics (INFP).

The quake occurred in the seismic area on Vrancea. A second less powerful earthquake of 2.7 took place in the same area more than half an hour later.

The INFP said that the 5.3 earthquake happened at a depth of 91.6 kilometers.

According to local media reports, the seismic movement was felt in Bucharest, Romania’s Capital that has more than 2 million inhabitants, but also in other cities such as Iasi, Brasov and Craiova. The quake was also felt in the neighboring Republic of Moldova.

Four quakes with a magnitude over 4 took place in Romania since the start of the year.

Representatives of emergency institutions said they did not receive any calls following the earthquake that took place in early morning.

Bucharest alone has over 700 buildings in the seismic risk category, out of which 200 represent a public risk.

The strongest quake that hit Romania in recent years, was a 5.7 magnitude earthquake that rocked the country in 2014.