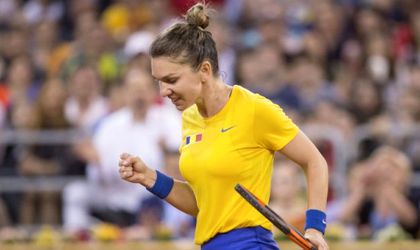 Romania defeated Switzerland 3-1 in Fed Cup’s World Group play-offs. The Romanian team, led by WTA World No 1 Simona Halep, won its bid to return to the top tier of the Fed Cup by BNP Paribas in front of a record breaking audience of 10,000.

“It’s the first time when I’m in the team as the No.1 in the world,” Halep told fedcup.com ahead of the meeting. “Of course, it’s bigger pressure, and everyone expects me to win all the matches. It’s not easy in Fed Cup, it’s different – you’re playing for the country. It will be emotional, but I feel ready. I’ve worked hard these two weeks, and clay is one of my best surfaces, so I’m looking forward to playing the match.”

Halep gave Romania an opening victory on home soil in the first match of day. She defeated Switzerland’s Viktorija Golubic in three sets, 6-3, 1-6, 6-1, in a match she described as “really tough.”

“It was really tough to start the match after that ceremony,” she told reporters after the match, quoted by fed cup.com, reflecting on the opening ceremony held in front of a sea of chanting fans occupying the sold out indoor clay court Sala Polivalenta in Cluj. “That was amazing, and never happened until now. I love it, I’m happy to feel it – you never have this during tournaments, just the two days here in Cluj. It’s something huge, but it’s tough to control.”

The Romanian No.2 Irina-Camelia Begu brought another victory to the home team after she defeated Timea Bacsinszky in straight sets, 6-4, 6-1.

In the third singles’ match, Halep defeated Patty Schneider, who is just returning to the tour, in two sets, 6-2, 6-1.

In the next stage, Romania can face France, USA, Czech republic or Belarus.