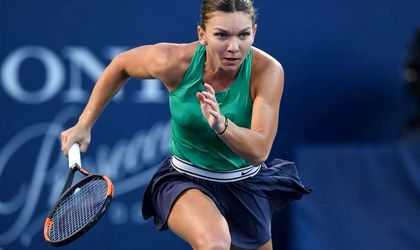 Fresh after winning the Rogers Cup, World No 1 Simona Halep sat down with WTA Insider and looked back at a week of “brutal effort” that saw her play two matches in a day and defeat four top 20 players before lifting the Rogers Cup.

For debut match at Rogers Cup in Montreal, a second-round clash against Russia’s Anastasia Pavlyuchenkova, Simona Halep spent three hours on court to earn a 7-6, 6-4, 7-5 victory. Her recovery time was very short though, as, the same day, she met Venus Williams for their third round match. The Romanian prevailed in two sets, and went on to defeat Caroline Garcia, and Ashleigh Barty to advance to the final.

In a rematch of the Roland Garros final, which Halep won for her maiden Grand Slam title, the World No 1 defeated Sloane Stephens in three sets, 7-6(6), 3-6, 6-4 in 2 hours and 40 minutes to capture her second Montreal title. But playing competitive matches after a three-week break, when she didn’t ‘touch’ the tennis racquet, but kept going regularly to the gym, had a toll on the player’s match fitness, she told WTA Insider in a recent interview. In fact, she was close to retiring right after the first match.

“After I played three hours and a half hours with Pavlyuchenkova I talked to Darren and I said I can’t do anymore. I can’t go on court anymore,” Halep said during the interview. In what looked like a possible upset, the Russian had given her all to stop the Romanian from prevailing. “It was a great match, a great fight. She played unbelievable and was fighting until the end. I’m really happy that I could fight until the end,” she said. Halep said on-court after the match.

“I was very sore straightaway and I had to spend a few more hours there, so it was worse,” Halep explained. “And when I woke up actually – because I slept a little bit – when I woke up and I said Okay I’m going to give it a try. And I saw on court that Venus was struggling a little bit, honestly. I said okay now it’stime, and the next day I was really okay to continue,” she told WTA Insider.

By winning the title, for the second time in her career, Halep surprised herself as well as her coach, Darren Cahill. “I did [surprise myself] and also Darren was surprised. I didn’t play tennis for three weeks after Wimbledon. But I did gym every day. So my physical part was at the same level, so I didn’t lose much. I didn’t run because I had my Achilles problems but still I did in the gym,” Halep said.

Getting the ‘tennis legs’ back

But in Montreal Halep did more than win a title. According to the Romanian player, she also got her “tennis legs” back. “Yeah, I surprised myself with my desire on court. It was really, really high and I didn’t give up at any point during these matches. I think I was close to playing my best tennis in the last matches, and physically, in the semifinal, I felt like my tennis legs are back. So I felt really confident on them and maybe that’s why I was able to finish yesterday,” she said.

But still, I felt like I’m dead in the second set so I can feel the break. I can realize that it was not the great move to stay that much but I think also it was good for my head,” she explains.

As for her desire to keep on fighting and winning tournaments and Grand Slam titles, Halep was very clear that she still has that fire in her belly. “They asked me yesterday if I lost my motivation after French Open. I said, Come on, I won only one. I don’t have 20 Grand Slams to now lose my motivation.

So it’s like a bomb full of good energy and a bomb of desire that I want more. So I feel that,” she said.

According to Halep, the recipe for success lies in a combination of being fresh physically and mentally.”Both being fresh and also the mental. The mental I think is 95 percent these days. Everyone knows how to hit the ball and everyone is working hard in the gym. I try to keep that very professional. I don’t do something special. I just rest when I finish a tournament,when I can I go home for even two days just to take the energy back and recharge my batteries,” she explained.

“I feel that my life it’s really nice and beautiful. I have only positive people around me. I feel that helps me to stay healthy and to stay with energy for playing tournaments. Injuries, I had a few this year but they were little injuries so I take care of my body,” she added.

“My priority is tennis in my life, so I do everything just to be good for this sport. I think this is the secret to be consistent. Maybe other things also. But the hard work is the most important thing,” Halep concluded.

She will play next in Cincinnati, before heading to the US Open.