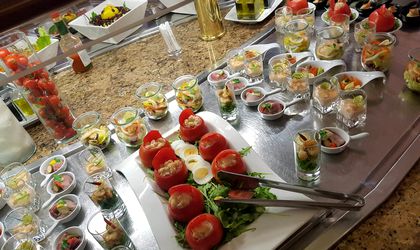 Pursuers of piscatorial pleasure will be caught hook, line and sinker at the InterContinental’s Sunday brunch.

(The day-of-rest breakfast-lunch hybrid is a crowded culinary field in Bucharest, which sees the major five-star hotels and upmarket cafes battling for the brunchers’ buck – in large part expats and families.)

Brunchissimo’s star is the lobster, served warm or cold at your request, and there’s also a cast of supporting seafood, from oysters lounging on a bed of ice alongside the lobster at the seafood bar, to fancy little morsels of fish served in shot glasses. There’s plenty of other fare, but if you’re not a fish fan, the best bits will be rather wasted on you.

The Italian branding, which owes itself to the nationality of the hotel’s chef, gives an idea of the provenance and flair of the fare, but there are local options too, such as foreigners’ favorite zacusca (for the uninitiated: a sandwich spread of eggplant, tomato and peppers among other veg), salata de vinete (eggplant salad) and fasole batuta (mashed beans).

The full range of options would probably exhaust my word count: all but the most dedicated gourmands would have to come several times before they could sample everything. But basically, it can be summed up as a very high-end buffet. Besides the headlining seafood, there’s a salad station, various substantial hot dishes, a couple of soups, a wealth of cheeses and a well-stocked dessert section, whose piece-de-resistance is a chocolate fountain.

It was here that the creativity of the kitchen most shone. Being Halloween weekend, the food selection was pepped up with spooky décor such as pumpkins and witches. But staff had really gone to town with the desserts, which had been fashioned into severed fingers, mini coffins and bloodshot eyes. A lovely comic touch (and one with which the mischievous bruncher could prank their companions. Muahahahaha!).

The feasting goes down to live jazz, which is perfectly pitched for the occasion: sophisticated yet relaxed. Any young, independent adults who fear that the family-friendly atmosphere might be a little too rambunctious for their Sunday-morning hangovers, allow me to allay your concerns: a separate room is set aside for kids, with entertainers, a special menu and various equipment, so they can disport and gorge themselves away from the grown-ups.

Brunching in Bucharest is not cheap: the InterCon charges RON 210, which is in line with its high-end competitors. But – unless you’re on a diet, and it would certainly be hard to stick to it once you saw the seafood counter – Brunchissimo offers real value for money: a portion of oysters alone could account for a third or even half of that sum in another top-class eatery in the capital – and it wouldn’t be all-you-can-eat. The price also includes champagne, wine, beer, coffee and soft drinks (everything except spirits), so eager drinkers can put in a session.

Furthermore, if you have the stamina – and appetite – you can stay for four hours, plenty of time for repeat trawls.