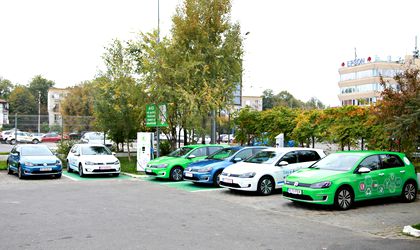 Renovatio, in partnership with Kaufland and Volkswagen, has completed the first public network of charging stations for electric cars in Romania. As of now, it is possible for owners of electric cars to drive between Arad, Bucharest and Constanta.

The completion of the network, which was finished six months ahead of schedule, will be marked by the start of Electric Drive, on October 22. During the drive, six eGolf electric cars will participate in the longest electric car race ever held in the country, in order to highlight the fact that the new infrastructure provides extended autonomy to eco-friendly cars.

„With the completion of the infrastructure for electric cars on the Constanta – Bucharest – Timisoara – Arad corridor, it becomes possible to break city boundaries and to leave the comfort zone offered by the charging solutions at the office or from home and to drive on bigger distances with electric cars between cities. Specifically, the Electric Drive caravan aims to show that, by developing the public infrastructure, namely the Renovatio e-charge charging stations network, electric cars become a viable alternative, both in the city, as well as between the large cities,” Renovatio CEO Alexandru Teodorescu stated.

„We are happy that the first network of charging stations for electric cars is fully functional and this way we can help Romanians drive in an eco-friendly way,” Valer Hancas, Kaufland Communication and Corporate Affairs Manager stated.

„Those who think of the future, think about the redefining of the concept of mobility. That is why, from 2015, Volkswagen, with Renovatio support, installed the first Quick Charge station în Romania, which is available to all Volkswagen clients,” Bogdan Florea, Volkswagen Brand Manager said.