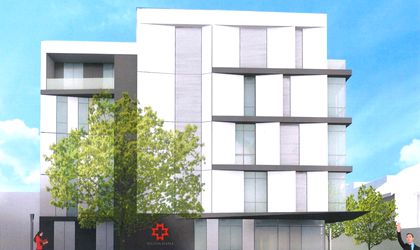 Private healthcare services provider Regina Maria plans to start operations on its first hospital outside Bucharest in the first quarter of 2018.

Located in the center of Cluj-Napoca, the hospital is being developed by Horia Ciorcila, the head of the board of Banca Transilvania, following an investment of EUR 15 million.

Fady Chreih, the CEO of Regina Maria, said that the medical operator will lease the hospital and bring its own medical equipment, adding that this is the strategy used across its network. Last year, the company secured EUR 15 million from the European Investment Bank (EIB), under the Juncker plan, to finance new investments in the medical infrastructure across the country.

Chreih explained that Regina Maria has been present in Cluj-Napoca for close to a decade, investing over EUR 7 million in the city. Its current operations include two polyclinics, two laboratories, one center of medical analysis and one for labor medicine, as well as an expertise center for diabetes and nutrition disease. The company also has call center operations in the city.

“We have positioned it as a regional hospital,” said Chreih, adding that the new unit will cover 7,000 sqm. Regina Maria provided services for 150,000 patients in the western city last year.

At present, the company is recruiting the core medical team, mainly surgeons, which will coordinate all the activities in the new hospital. In total, the new investment should create 300 new jobs, on top of the 350 employees that Regina Maria already has in the city.

The executive stated that Regina Maria will employ directly 60 percent of the people for the new hospital, while 40 percent will be collaborators.

Cluj-Napoca currently generates 12 percent of Regina Maria’s turnover, but Chreih is confident that this contribution might even triple once the hospital is fully operational. In addition, the company has around 40,000 private medical subscription packages in this city, out of the 430,000 contracts of this kind in operation across the country.

“We want to target a turnover of EUR 120 million this year and we are very well positioned from this perspective,” said the CEO on the business expectations of Regina Maria’s network for 2017.

Regina Maria has made two acquisitions in Cluj-Napoca in preparation for the launch of the hospital. It took over private ambulance operator Prompt URG and the laboratory Santomar OncoDiagnostic. The emergency service has 12 ambulances and a team of 6 doctors and 6 nurses, alongside 21 ambulance operators. It was founded in 2004 by Sabin Giurgiu.

Santomar OncoDiagnostic, specialized in pathological anatomy and cytology, has 18 doctors and was founded in 2008.

“We want to strengthen our geographical position in the areas in which we are already present,” said Chreih on the expansion strategy.

Regina Maria might go public in the next years, but this is one of the options that could be pursued by the main shareholder of the medical operator, private equity firm Mid Europa Partners.

“The listing in an option of the medium term,” said Chreih, explaining that an investment fund can sell its stake to another fund, to a strategic buyer, or do an exit through an Initial Public Offering (IPO) – which was the case in private healthcare services provider MedLife.

Regina Maria is present in 39 locations across the country, with over 4,600 employees and collaborators. Its network includes 4 hospitals, 3 hospitalization centers, 2 maternities, 8 medical campuses and dozens of imagistic and analysis laboratories.