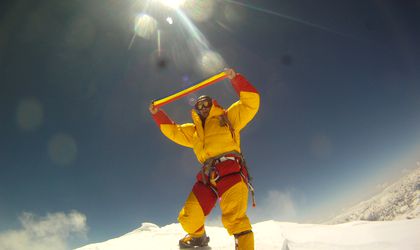 Horia Colibasanu has reached the highest point on Earth, the peak of mountain Everest, on Tuesday, at around 6.20 AM, Romanian hour, according to a Facebook post.

“He climbed without supplementary oxygen and Sherpa support.

Everest is the eighth 8000-meter peak in his portfolio and the 2017 expedition it is another #first #for #Romania,” according to the post.

PM Sorin Grindeanu congratulated Colibasanu on Facebook, claiming that he was the first Romanian that climbed Everest without supplementary oxygen and Sherpa support.

“His tenacity is an example for all of us,” said the PM.

Colibasanu reached the top at 8,868 meters after a long summit that lasted 12 hours.

According to a post on his website, Colibasanu’s expedition partner for Everest is German Ralf Dujmovits, 55, who reached the 14 peaks of over 8,000 meters.