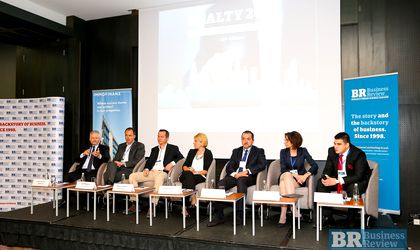 Whether the Bucharest office market will be able to absorb the high level of new office stock being delivered this year was at the forefront during the debates. But the fact that there is a larger office stock being delivered this year should not be a reason for concern, stressed Sorin Visoianu, country manager operations Romania at Immofinanz, during Realty 2016 – Romanian Real Estate Market Forum.

There is demand coming from existing tenants as well as potential newcomers on the local market and the overall evolution of the economy is encouraging, he told participants. “Since the start of the year, we have had 37,000 sqm freshly leased, out of which 20,000 sqm is for new companies,” said Visoianu.

A look at the regional context shows that the market has the capacity to absorb this year’s deliveries, added Mihai Paduroiu, head of the office agency at CBRE Romania. Romania is currently the most attractive business destination in Central and Eastern Europe and the class A office stock per capita is well below the region’s average, he outlined. Moreover, prime rents in Bucharest are the lowest in Eastern Europe. All this means that there is still plenty of room for growth, he stressed.

“We have a very dynamic market in terms of demand and new business. Last year, we had 70,000 sqm leased by new companies coming to Romania or by companies that are already present and had decided to expand their operations. This was the highest level in the region except for Warsaw,” said Paduroiu. A similar trend can be observed outside the capital in regional cities such as Cluj-Napoca, Iasi and Timisoara, where demand has grown tremendously in the past three years, he added.

Back in Bucharest, demand for new office space is coming from a large variety of companies, said Geo Margescu, founder & CEO, Forte Partners. While it is hard to outline a profile of the most active companies in terms of new leases, one thing they have in common is their focus on streamlining costs and getting the best value for their money, he added. Indeed, while there is room for new office projects in the market, developers need to meet the requirements of more demanding tenants, argued participants. Nowadays a developer needs to offer services, not just space, and to have a flexible policy towards its clients, said Visoianu. Flexibility and consolidation are indeed the key words, agreed Aurelia Luca, country director, Skanska Property Romania.

Many companies that have had several offices throughout the city are now looking to consolidate them in single office project for efficiency reasons, she told the event. Once such company is Orange Romania, which has relocated employees from four different offices in Bucharest to Skanska’s Green Court Bucharest project. All in all Orange Romania relocated 1,600 employees to the new address, moving them to a space which has been customized to reflect the employees’ activity, said Andreea Patrascu, program management office manager, Orange Romania. “We have registered an increase in the productivity of employees since the relocation,” she added.

Another developing aspect is the growing demand for green buildings. Green certifications are a must-have for today’s office buildings and for many tenants it is a CSR requirement that needs to be ticked, said Florin Furdui, country manager, Portland Trust.