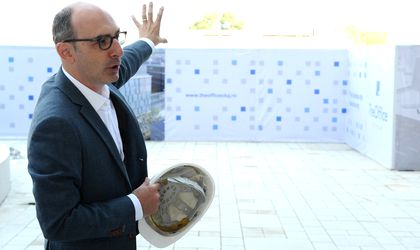 Romanian entrepreneur Ovidiu Sandor says he is planning to develop a new office project in Timisoara, which will be rolled out in three phases.

Sandor said that he is seeking to secure all the permits for the new project. The developer estimates that the first leasable spaces will be finished in the first quarter of 2018.

The construction works are slated to start this autumn.

The offices will be developed on a five hectares plot of land in Timisoara, where the businessman is also planning to build a residential project that will feature some 1,200 apartments.

Sandor explained that the office project in Timisoara will take into account the model of The Office model in Cluj Napoca.

“There will be only one building at the end, developed in three stages, which will allow us to have large surfaces on the floor, and the possibility of horizontal expansion in the same building. In addition, we want to obtain the highest international green certification for a building developed outside of Bucharest so we can offer our tenants a building with a reduced impact on the environment and with lower administrative costs,” said Sandor in a statement. He did not mention the total leasable area of the new project, nor the required investment.

The office demand in Timisioara has been fueled by companies that are expanding their operations, but also by new firms appearing in the city. Companies are also looking for new office spaces so as to attract and retain the best employees.

In the past, Sandor has developed the City Business Centre office project in Timisoara, which he sold to NEPI in 2012 for an estimated EUR 90 million. He is also the developer of The Office project in Cluj Napoca in partnership with NEPI.