Radio Hall hosts Gabriel Croitoru in Royal Concert on May 6 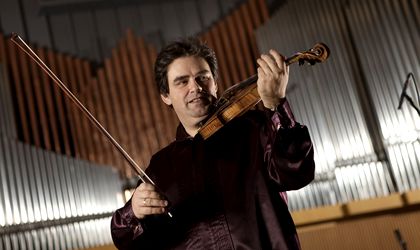 Under the wand of Nicolae Moldoveanu, violinist Gabriel Croitoru will perform Tchaikovsky on a Guarneri violin, previously used by George Enescu during the Royal Concert on May 6 at the Radio Hall.

Among the evening’s highlights will be Eduard Hubsch’s Royal Anthem, Tchaikovsky’s Concerto in D Major for Violin and Orchestra, op. 35 and Mendelssohn’s Symphony no. 4 in A major, op. 90 – Italian. The concert celebrates King’s Day, May 10, and comes as the Romanian Royal House marks 150 years.

Violinist, accompanist, organist and not least conductor, Nicolae Moldoveanu is a Romanian musician who studied within superior education institutions across Europe, such as the  Conservatory in Leipzig (where he studied organ), the Conservatory of Zurich (conducting), Basel,  Bern and the Royal Academy Music in London.

Violinist Gabriel Croitoru has gathered more than a thousand stage appearances. He performed as a soloist in the company of major orchestras around the world, such as the London Royal Philharmonic, the Chamber Orchestra “Queen Sofia”, symphony orchestras in Monte-Carlo, Thessaloniki, Malaga, Seville, Cannes, Lyon and others.

He held recitals in France, Spain, Germany, Belgium, Netherlands, Italy, China and the USA. Starting with 2011, he held several national tours under the heading “Violin duel” (along with Liviu Prunaru and Horia Mihail) and “George Enescu’s violin in the villages” (along with Horia Mihail).