Protests in Romania continue for eighth night in a row 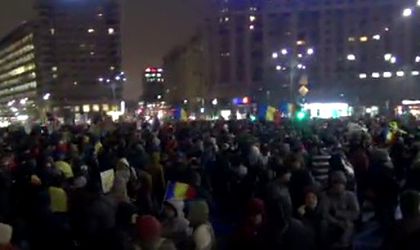 Around 5,000 rallied rallied on Tuesday evening in from of the government building, in Bucharest, asking for PM Sorin Grindeanu to step down. This was the eighth night in a row when people took to the streets in the Romanian capital and some of the bigger cities across the country.

Also, for the third night in a row, around 2,000 people rallied near the Cotroceni Palace, asking for the resignation of president Klaus Iohannis. The crowd, which comprised mainly seniors, also voiced their support for the Grindeanu-led government.

The political crisis in Romania lingers on, as the government doesn’t seem to have fully given up its intentions to amend the Criminal Code and Criminal Procedural Code. Meanwhile, president Iohannis suggested during his speech in Parliament that the potential resignation of a minister and the repeal of the amendments to the Criminal Code are not enough to ease the political tensions. However, he added that at this point it would be too much to call for early elections.

On the ruling coalition side, the head of the Social Democratic Party (PSD), Liviu Dragnea, said that there are no plans to suspend Klaus Iohannis.

Despite the ongoing political tensions, the Parliament was able to pass the public budget program for 2017, which means that Romania has not reached the stage in which the decision making process gets blocked due to political conflicts.