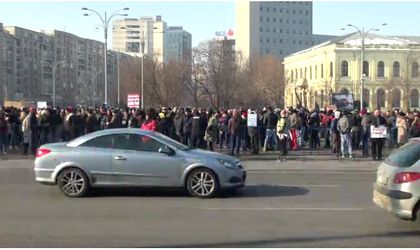 Around 1,000 people had gathered close to the Government building on Wednesday to protest against the approval of controversial amendments to the Penal Code on Tuesday night.

The protesters are asking for the resignation of the center-left government led by Sorin Grindeanu.

On Tuesday night, over 10,000 people had protested in front of the Government, while the ministers were approving the amendments through an emergency ordinance. In addition, the ministers decided to send the draft pardon bill in Parliament for approval.

Over 90,000 people had protested on Sunday evening across Romania, asking for the government to abandon these changes to the penal legislation.

The amendments, which partially decriminalize the abuse in office, have been vigorously criticized by the opposition parties, president Klaus Iohannis and the high-ranking representatives of the judiciary.

The head of Romania’s Anti-corruption Directorate (DNA), Laura Codruta Kovesi, said the changes approved last night are “very grave” and “the anti-corruption efforts will be lacking substance if these amendments will be applied”.

Meanwhile, the Council of Superior Magistrates has decided to challenge the emergency government ordinance approved last night at the Constitutional Court.

The anti-system party USR, led by Nicusor Dan, and the liberals have announced plans for a motion of no confidence against the government led by PSD and ALDE.