President Iohannis, to Prince Charles: “Cooperation in military, security fields and economic relations are the pillars of UK-Romania strategic partnership” 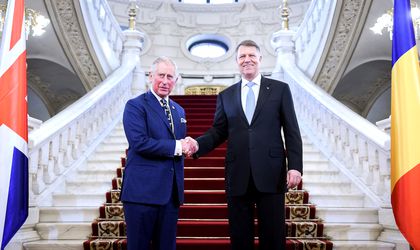 Romanian president Klaus Iohannis acknowledged that the United Kingdom is a strategic partner of the country during an official visit of Prince Charles in the country.

“The official visit that you make, after several private visits that prove your attachment to Romania and its people, represent an important pillar in the consolidation of the strategic partnership between Romania and UK. The intense cooperation in military, security fields and the economic relations are the pillars of this strategic partnership,“ said president Iohannis.

He added that another important element in the UK-Romania relation is the Romanian community living and working in the UK.

Iohannis recognized the activity of Prince Charles in Romania, starting 1998 when his first official visit took place, until now, promoting the image of Romania worldwide. He also got involved in local community project in Romania designed to preserve the patrimony and the Romanian tradition.

„There are several examples of these projects, such as the one launched in 2015 at Viscri- “Foundation of Prince of Wales”and the one launched in 2016, “The Prince of Wales’s Training Centre”. I also remember about your appearance in the documentary “Wild Carpathia”, recognized as one of the best films about the wild beauty of Romania,” added Iohannis.

This is why Iohannis offered Prince Charles the national distinction “Romania’s star” as Grand Cross distinction of Romania.

The president also sent condoleances to the families’ victims from London and wishes for recovery of the victims of the terrorist attacks from last week.