President Basescu’s first appearance since protests: The completion of the new health law is among 2012 priorities 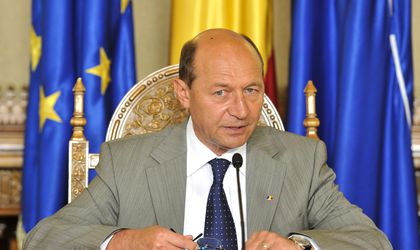 “The new health law will be completed,” said President Traian Basescu during an intervention at Cotroceni, which was the first appearance after the start of the protests against the current administration in Bucharest and major Romanian cities.

Basescu said the main leson he learned is that “a responsible attitude in the political and economic plane is a fundamental premise against crisis,” said Basescu.

“I will continue to be an active partner of the government in adopting measures to which we committed via the agreement with the IMF and EU. We have in sight a possible administrative reorganization of the country,” said Basescu.

He also mentioned that “all the conditions are in place that, by keeping the pace of reforms, promoting cautious budgetary policies and improving the absorption of European funds, the Romanian economy will post in 2012 and over the next years positive economic growth.”

Basescu also spoke about restrictions applied to Romania in the Schengen area.

“We are surprised with the decision regarding the accession of Romania and Bulgaria to Schengen is still delayed, although all conditions are met,” he said. We believe that the decision to maintain restrictions regarding Romanians’ access on the labor market in nine European states is fully unjustified,” said Basescu.