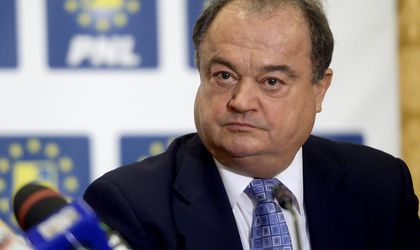 Vasile Blaga, The co-chair of the National Liberal Party (PNL) has stepped down. On Wednesday Blaga was prosecuted by the National Anticorruption Directorate (DNA), under influence peddling allegations during his term as Liberal Democratic Party (PDL) General Secretary.

DNA prosecutors argue that Blaga and Stefan made an agreement to obtain funds for the PDL by nominating for leadership positions within state companies of institutions of certain individuals who would then award contracts to companies willing to provide the PDL with funds. “In 2009, within the ruling political party there was an agreement between individuals in leadership positions, namely Secretary General Vasile Blaga and Vice-president Stefan Gheorghe, with the purpose of obtaining money for the party,” a statement by the DNA reads.

“Following accusations brought against me today, I will prove my innocence in front institutions in charge. I myself am the guarantor of the observance of the PNL charter and of all party decisions. I cannot ask colleagues to abide by integrity principles, unless I do it. As such, I will act accordingly and resign from the position of PNL co-president and from that of head of the elections campaign for this year’s parliamentary elections,” Blaga said in a press release, according to Agerpres.

The party has not yet named an interim leadership.