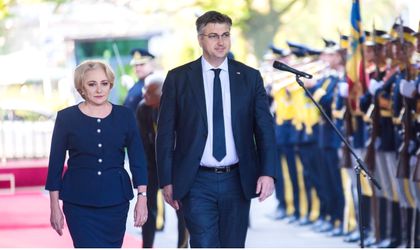 PM Viorica Dancila and Croatian PM Andrej Plenkovic held a common press conference after their meeting at the Victoria Palace on Friday.

PM Dancila talked about a good bilateral relationship existing between the two countries and said that there is great potential for cooperation in areas such as education, internal affairs, minorities, defense or agriculture.

The Romanian prime minister added that her discussion with the Croatian PM also focused on the importance of cooperation on tourism: “Considering the growing number of Romanian tourists who visit Croatia, as well as Croatian tourists who visit Romania, our cooperation in this field is very important. For this purpose, as well as for the Romanian community in Croatia, we opened an honorary consulate in the town of Split in March, which will contribute to the strengthening of economic relations,” Dancila said.

The PM also mentioned the good level of commercial trade between the two countries, which grew by 25 percent in 2017, thanks to the efforts made last year. She also pointed to the importance of the Romanian and Croatian minorities living in the two countries.

According to Dancila, another part of the discussion focused on cooperation in the European context and from the point of view of the two countries’ upcoming Presidencies of the European Council, as both countries will be holding this position for the first time since they’ve become members of the EU.

“PM Andrej Plenkovic and I agreed that the Cohesion Policy and the Common Agricultural Policy remain the main investment priorities in the upcoming EU budget,” Dancila added.