PM Ciolos: The acquisition of the first set of F16 airplanes is a major investment in our defence capability growth 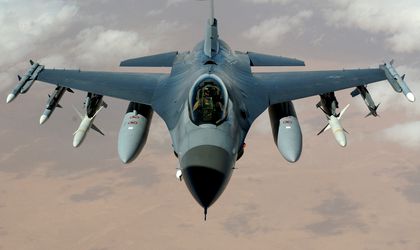 The prime minister Dacian Ciolos said today that the acquisition of the first set of F16 airplanes is a major investment in the Romanian defence capability growth.

„I am glad for this strategic decision taken by the Romanian decision makers in 2013. It’s indeed a historical day for Romania and the Romanian Air Forces and I think it’s a well-deserved day for the Romanian Air Forces that have fulfilled their duty until now and that through this platform, a new instrument for showing their performance. Our evolutions next to the Alliance needed the embedment of NATO transformations during the adaptation process of their own defence system in an efficient manner. The acquisition of the first airplanes set of high performance from Portugal represents a major investment in our defence capability growth,” said Ciolos.

The F16 Fighting Falcon airplanes took place at the Air Base 86 from Fetesti.

Ciolos added that Romania has an „important national political agreement” that implies giving 2 percent of the GDP for defence in 2017. At the same time, he thanked the Portuguese Government for the support in the agreement signed in 2013, saying that it’s a cooperation model that can be extended in several domains, including the economic one.

„I believe that this cooperation represents an example of excelence that will continue after delivering all the 12 airplanes until the initial operational capability will be reached. It’s very probable that the excelent cooperation in defence domain between Romania and Portugal to be followed by an industrial one,” said Ciolos.