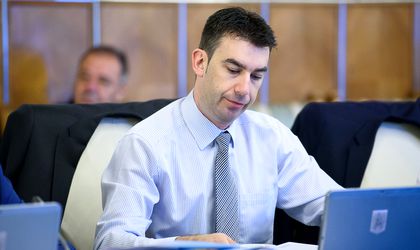 PM Dacian Ciolos has appointed Dragos Tudorache as interim Minister of Internal Affairs. He is replacing Petre Toba, who resigned five days ago after the National Anti-corruption Directorate prosecutors started criminal prosecution against him under embezzlement allegations.

Head of Prime Minister’s Chancellery Dragos Tudorache was appointed on Tuesday at a Victoria Palace conference. “I want to let you know that I analyzed the situation within the MAI [Ministry of Foreign Affairs] (…) Given the situation, initially I took into consideration an interim. I decided not to go with an interim (…). I will go with a definite proposal. (…) I decided to go with a civilian. (…) I did not have too much choice, because it is difficult to convince someone from outside to come for four months, (…) I propose Dragos Tudorache, the Head of Chancellery,” Dacian Ciolos said at the press conference.

The announcement was expected on Monday September 5, but was delayed due to the PM’s visit to Bavaria. Tudorache has also acted as the interim Minister of Communications and for Information Society.