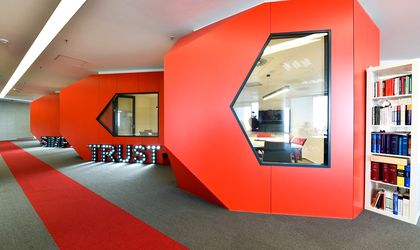 Telecom company Vodafone Romania has relocated 2,300 of its employees from three locations in Bucharest to Globalworth Tower, the office project developed by Ioannis Papalekas in the northern part of the town.

Ravinder Takkar, the president & CEO of Vodafone Romania, said the new offices were in a “fabulous location”, citing the great social infrastructure and the public transit as some of the reasons why this building was selected.

Takkar said in a meeting with journalists that the offices in the Barbu Vacarescu area are some of the newest that Vodafone has across Europe.

At present, the telecom player has leased 8 floors, including the mezzanine and part of the ground floor. The company covers in total 17,800 sqm.

In the new offices, the company has brought together almost all the business operations, including the enterprise services, legal, marketing, PR and the customer care division. There are 94 meeting rooms and an extended area for training that covers 1,000 sqm.

The design concept is called “Vodafone City” and was largely developed in Romania, with some guiding principles from the group.

The tower has received the LEED Platinum certificate for green buildings. The office project has 26 floors in total.

The former HQ of Vodafone Romania was in an office building in Charles de Gaulle Square, near the Herastrau Park.