Over EUR 140,000 collected on Friday for the HOSPICE House of Hope 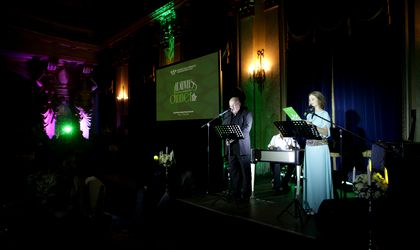 There were 170 guests present on Friday evening at Edelweiss Classical Celebrations Dinner organized by HOSPICE House of Hope for children and adults at the Palace of the National Military Circle from Bucharest, collecting over EUR 140,000 for the palliative care of the patients.

Edelweiss Classical Celebrations Dinner was presented by the actors Diana Cavallioti and Constantin Cotimanis. Cotimas began the evening by reciting its own poetry, together with the artist Marius Mihalache. The evening continued with the princess Marina Sturza, who held a speech about the HOSPICE cause, followed by Mirela Nemțanu, executive director of HOSPICE.

The artistic moments were held by the musicians Razvan Suma, Rafael Butaru and Marius Mihalache.

During the HOSPICE Champion Award, the companies Globalworth and Kaufland Romania were awarded for the support of the HOSPICE. The awards were handed by the founder and president of HOSPICE House of Hope, Graham Perolls.

During the evening there was also a call auction presented by Vlad Babenco from the auction house Lavacow.

HOSPICE House of Hope was founded in 1992 at Brasov and introduced the concept of palliative care in Romania.