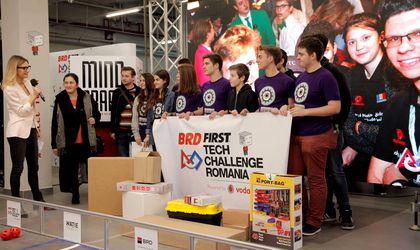 The BRD FIRST Tech Challenge Romania powered by Vodafone was rolled out in 48 high schools from Romania and 33 cities. Over 800 students enrolled in the competition to form teams that will construct, program and operate robots.

At the FIRST Tech Challenge Hub from Thursday, November 24, were given the first kits of pieces and components to the teams from 11 high schools from Bucharest that they will need to construct robots. The total value of the kits and the equipments that the teams benefit from for free is estimated at EUR 280,000. Also the students will have access to webinars and online tutorials of projections, design and programming and also live training sessions made by FIRST Tech Challenge Hub, with the help of Bucharest Polytechnic University.

“The idea of bringing this concept in Romania came from the passion of Victor, my oldest son, for technology and robots. He is part of the team that won the first place this year in Austria and Germany. I’m very happy that we can organize the biggest robotics competition in our country; it’s a project that I’m very dedicated to and the young people that enrolled are very enthusiastic. The winners of the final will go on spring at the World Championship of Robotics organized in USA,” said Dana Razboiu, president of the Association Nation through Education.

Besides the robots construction competition, students must promote their team and become known in their communities. The winner robot will attend the World Championship of Robotics in St. Louis, USA in April 2017.