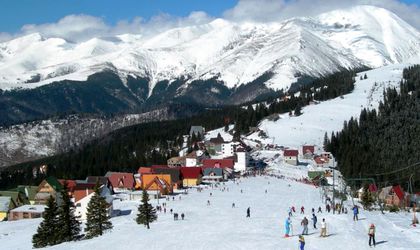 This New Year’s Eve were over 167,000 Romanian tourists in the Romanian resorts, by 5.5 percent more than the previous year, and spent close to EUR 37 million, an year on year growth by 11 percent, according to the Unions’ Federation from Romanian Tourism (FPTR). The highest demands were for Valea Prahovei, Poiana Brasov, Paltinis and Ranca.

Hotels owners expected for the New Year’s Eve an year-on-year decrease in the number of tourists, considering the lower purchase power and the fact that during this period it was not snowing, according to a release of FPTR.

„Without becoming, as we all want, a destination that foreigners are taking into account when they plan the New Year’s Eve holiday, Romania has become year by year the main holiday option for Romanian tourists. The accommodation tariffs are accessible, the food is cheaper than anywhere else in the competitive destinations, as well as the fact that it is a safe country make the number of Romanian tourists in the Romanian resorts increase constantly year by year. However, the warm weather, abnormal for this period, led to a decrease for the internal and external ski destinations,” said Dragos Raducan, prime vice-president of  FPTR.

As usually, the popular destinations were full, posting an year-on-year increase in the number of tourists at national level by 5.5 percent.

„Still, the highest number of accommodations booked for the New Year’s Eve was registered in the rural tourism. Thus, 58,000 tourists chose to spend the New Year’s Eve at guesthouses, by 5.5 percent more than the last year. Due to the consistent package of services, in this segment were registered the longest stays, up to five nights,” says FPTR.

Also, over 28,000 Romanians spend the winter holidays in balneary resorts, an year-on-year drop by 3.4 percent.

The number of tourists who spent the winter holidays abroad increased year-n-year approximately by 8 percent, spending by 13 percent more than the last year. Most of them chose ski and winter sports destinations packages in Austria, France, Italy and Bulgaria.