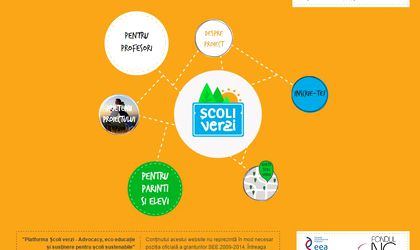 A project offering environment education under a teaching platform called Green Schools (Scoli verzi) has already been accessed by over 10,000 students across Romania, project representatives said during a press conference today.

The project, funded under the 2009-2014 EEA Grants under the NGO Fund with EUR 143,289, has launched an online platform containing an educating kit addressing secondary school students. The kit includes an interactive multimedia manual, a guide for the professors and a book of activities teachers can implement with their classes.

During the pilot the project gathered the interest of 75 classes from 41 schools across Bucharest and six other counties. For next year there are 40 teachers who have already confirmed their interest in having 65 optional classes in schools across 16 counties.

The educational kit has been developed by specialists within the three NGOs that initiated the eco platform, Greenitiative Association, WWF Romania and Viitor Plus – the Association for sustainable development. They collaborated with 14 authors, professors and academic experts.

Romania has received a total of EUR 306 million in grants under the EEA and Norway Grants under the 2009-2014 program, the second largest investment by the funds among 15 countries in the region. Our country was surpassed by Poland (EUR 578.1 million), but followed at a distance by Hungary (EUR 153.3 million), the Czech Republic (EUR 131.8 million) and Bulgaria (EUR 126.6 million).