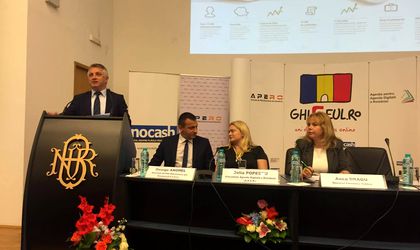 Minister of Communications Marius Bostan said today during a press conference that Romanians abroad will have access to online tax payment platform Ghisheul.ro by the end of the month.

The platform, which has been active since 2011, currently has over 115,000 unique users. The possibility of obtaining user access data online (as opposed to having to pick it up physically from the local tax office) has led to a surge in user numbers, the 100,000 threshold being surpassed in March 2016.

“In terms of electronic payments, in the first five months of this year there have been more payments than all payments made last year. One of the priorities we undertook was to simplify registration and increase the number of public institutions enrolled on the platform. We will put a ceiling to commissions at a maximum of 1 percent, one of the key changes being to reduce costs by 50 percent,” said Bostan, adding that Romanians abroad will be able to use cards issued by banks outside of Romania.

Some 250 town halls accept the online payment by card of taxes through the Ghiseul.ro platform, a 30 percent increase over the end of last year.

Romanians’ appetite for online payment of local taxes increased significantly in 2016, given that the value and number of transactions through Ghiseul.ro over the first four months accounts for nearly one third of all payments made via the national platform since its launch. Thus, taxpayers have made in the first four months of 2016 approximately 76,000 card payments on Ghiseul.ro, totaling more than RON 21 million. By comparison, during 2011 – 2016, Ghiseul.ro registered 250,000 payments worth over RON 70 million.

The platform also offers the option to pay traffic fines online due to the option of uploading a copy of the minutes directly into the system and the automated transmission to the Municipality. There is also a pilot project conducted for District 3 of Bucharest momentarily, allowing online payment of local taxes for legal persons.