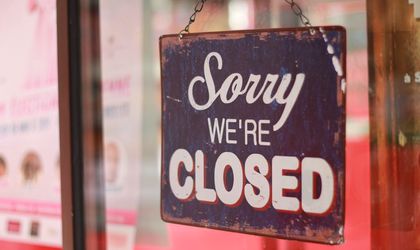 The number of businesses that suspended their activity during the first two months of this year has gone up by 51.89 percent, and that of dissolved businesses by 111.77 percent, compared to the same time period in 2015, reports the National Trade Register Office (ONRC), as cited by Agerpres.

Bucharest is the city with the largest number of suspensions of business activity suspension (654), seeing an increase of 64.32 percent from the previous year. After that are the Constanta county with 250 suspensions (+68.92 percent) and the Bihor county with 207 (+71.07 percent).

The number of businesses that entered into insolvency went down by 23.43 percent in the first months of this year compared to 2015, reaching 1,451 units.

The highest number of cases was registered in Bucharest (320, decreasing by 22.14 percent), in the Iasi county (103, 0.96 percent less) and in Bihor county (96, 2 percent less). The most affected economic areas were wholesale and retail, car and motorcycle repairs, with 466 cases, 28 percent less than in January-February 2015.