Nigel Kennedy to perform at Sala Palatului on October 16 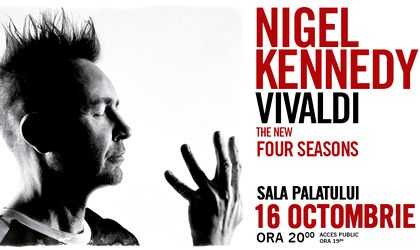 The violinist Nigel Kennedy is coming to Romania, in a premiere show at Sala Palatului in Bucharest on October 16, starting 8 PM in a concept show gravitating around Vivaldi’s “Four Seasons”.

The concert will comprise the “Seasons” by Antonio Vivaldi, this time performed in an unique manner by Kennedy next to an entire orchestra comprising 30 musicians.

“We are now, however, well into the 21st century so I want to present a new interpretation of the Four Seasons, which is relevant to the modern day,” says Kennedy.

After the show in Bucharest, the great artist will perform a second live concert in Cluj-Napoca on October 19, at 8 PM.

“Everybody moves on artistically. So this is a presentation of everything I hear in the music and I think I’m well placed to do this because I’ve played The Four Seasons in front of so many audiences, possibly thousands of times. I really love this music and want to give it as much as I can. I hope that this new approach brings you a different and deeper enjoyment of this amazing music,” he added.

From a young age, as Yehudi Menuhin’s protégé, he studied at the Menuhin School before moving to the Juilliard School of Music in New York to study under celebrated teacher, Dorothy DeLay.

During his career, Nigel Kennedy has undertaken international tours, performing with the world’s leading orchestras and conductors throughout Europe, North America, Central and South America, South East Asia and Australia.

In September 2002, Kennedy was appointed Artistic Director of the Polish Chamber Orchestra, a role the late Lord Menuhin once held. The violinist recently founded a new orchestra, made up of vibrant young (mainly Polish) musicians.