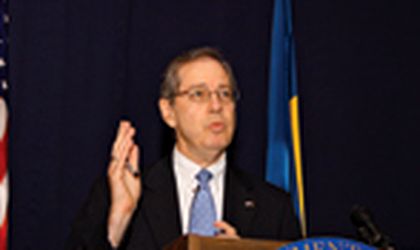 “Romania's economy has benefited from increased US trade and over USD 10 billion in direct investment in recent years, and we want this trend to continue. However, in this challenging global environment, Romania's ability to attract and keep foreign investors will require continuous efforts to improve competitiveness and to ensure a stable and predictable business environment,” said Gitenstein. The steps that should be taken include “increased transparency, regulatory reforms, strengthening and enforcing the rule of law, and greater efforts to consult and to partner with the international business community,” said the new US Ambassador in his speech. The former lawyer added that a meeting between the President of the United States, Barack Obama, and Romanian President Traian Basescu was unlikely since the American president is currently focused on domestic problems in the United States. Gitenstein also acknowledged that both Romania and the United States have important issues to solve in their healthcare systems. “I have a lot to learn about your medical care system. I think there is a feasibility study being done by the Commerce Department on how the US Government can be more helpful in improving [it]. But, as you know, in the US, we are struggling over the same issues so maybe both countries can teach each other a thing or two.” Gitenstein, nominated by US President Barack Obama as ambassador to Romania, has carried out lobbying activities at the United States Chamber of Commerce, provided consultancy to the Senate's Judiciary Commission and had a career as a lawyer.
Otilia Haraga