New housing player: What are Huf Haus’ plans in Romania 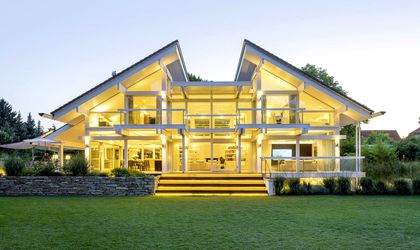 Huf Haus, a German manufacturer of high-end prefabricated timber and glass houses, will this September open two show houses in northern Bucharest, following an investment of approximately EUR 1 million, the company has announced. This is the first step in an ambitious plan to sell between six and 10 such houses per year on the local market.

The two show houses, presently being built in northern Bucharest, are the result of a partnership with a local investor who provided the land. In fact, the decision to come to Romania was based on this partnership, which was initiated by the Romanian investor, explained Michael Baumann, marketing and sales director with Huf Haus. Representatives of the German company have refused to disclose the identity of the Romanian partner, saying only that he lives in the UK and that he has been looking to start a business in Romania for several years. The plot of land where the two show houses are presently being built is big enough to host additional properties and the plan is to use it to develop an entire residential compound, said the investor’s representatives. Construction of the two Huf houses started earlier this year but delivery has been postponed to early September due to difficulties in getting the properties connected to the water supply and electricity grid, added Baumann.

Once completed, they should provide the starting point for the German manufacturer’s operations on the local market. While the houses come at a hefty starting price of approximately EUR 700,000, the German company is confident that it will find a niche segment on the Romanian residential market where it plans to sell between six and 10 houses each year.

The sleek design, originating from the Bauhaus architectural tradition combined with innovative building technologies, promises a high-end yet eco-friendly living experience for which the company is sure to find buyers on the local market, said Ann-Kathrin Laskowski, marketing and PR representative for Huf Haus.  “We have to find them here the same as we have to find them in Germany. We have around 10,000 leads each year out of which around 100 end up buying. So it is a narrow target group. We know that, but it is definitely worth it because we manage to find these individuals in Germany, the UK and Switzerland,” she added.

The German company manufactures and builds over 100 houses each year, some 60 percent of which are sold in Germany. The UK is its second market with some 20-25 units sold each year and Switzerland comes a close third. Buyers include both individuals and developers who later rent the houses for between GBP 8,000 and GBP 10,000 per month in the UK, says the company. This has makes the houses popular not only among homeowners but also among real estate investors, said Baumann.

Huf Haus was set up in 1912 and over the years has managed to build a brand known for both its modern timber-frame architecture and the energy-efficient technologies behind its buildings. While the houses can be individually designed, the main stylistic elements have not changed much over the decades. “It is just like the Porsche 911. The 911 from 50 years ago and the one from nowadays are very similar. The brand is the same but the technology behind it is different. It is the same with a Huf house. The brand is the same as 50 years ago but all the materials have changed and every year we work on the next step,” outlined Baumann.

The houses are manufactured in the company’s factory in Hartenfels, Germany, by about 170 workers. They use German technologies and materials with the exception of structural beams which are made out of glue-laminated, Scandinavian spruce wood due to its higher density and resistance, say company representatives. The house parts are afterwards transported and built up on site. The Huf Haus group of companies also provides financial consultancy, fit-out, furnishings and landscaping services, and can therefore provide turnkey projects.

Most of those who want to purchase a Huf haus start their enquiry online, said Baumann. “The first contact we have with some 90 percent of our future clients is via an online enquiry form which they fill in. In no more than three days we contact them, send them the brochure and invite them to see the village,” he added. The village is a collection of five Huf show houses built close to the company’s factory in Hartenfels, some 80 km from Cologne.  It is open all week and visitors can go there to get a better idea of the possibilities of building Huf houses. Over the years the company has invested an estimated EUR 35 million in show houses throughout the markets where it is present, arguing that this has proven the best marketing tool in convincing future clients.

The next step is an appointment to discuss the potential buyer’s available budget. “We also visit the future building site in order to assess potential side costs. After that, when we have a rough budget form, we provide the client with a planning contract,” continued the marketing and sales director. With this planning contract, architects from Huf start designing the house with the client, based on the latter’s wishes and available budget. After the final drawings are complete and additional costs such as those of the foundation are settled, a final budget takes shape. “When the price is fixed and the client has checked if it is possible to get a mortgage and gets the green light from the bank, then we draft the final contract. After that the client decides on fit out options,” added Baumann. Once permission to build is secured, the client will get the delivery timeline for the future house. Over the next eight weeks the house is manufactured in the Hartenfels factory and is delivered on site. “We need only eight weeks to bring all the materials there, to prepare and deliver on site. And four to five months later we hand over the keys to the new property,” he outlined. Onsite construction is done exclusively by Huf Haus employees, a way of ensuring the quality of the final product, concluded Baumann.

Huf Haus was set up in 1912 and to this day it remains a family-owned company, now led by the third generation of the Huf family. Throughout the past 104 years the company has built some 10,000 houses. Last year it reported a turnover of approximately EUR 80 million.