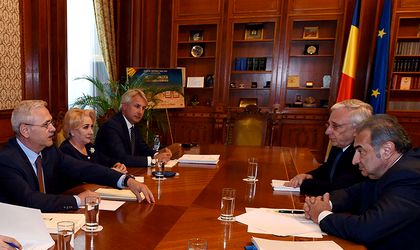 The president of the ruling Social Democratic Party and the Chamber of Deputies, Liviu Dragnea, announced on Thursday night that a constructive dialogue had taken place between himself, National Bank governor Mugur Isarescu and PM Viorica Dancila, on the subject of the status and development of the Romanian economy.

The main conclusion was that a large part of price increases was “caused by external factors” and that an “efficient and balanced mix of fiscal-budgetary and monetary policy” should be applied.

The follow-up statement by the Deputies’ Chamber said that there should be a permanent, open dialogue that takes into account the attributions of each institution between the Government and the National Bank.

President Klaus Iohannis had invited PM Dancila and BNR’s Mugur Isarescu for a mediation at the Cotroceni Palace, but Viorica Dancila announced last-minute that she would not attend, which caused the president to call for her resignation.

The talks lasted more than three hours, and Liviu Dragnea said at the end that the meeting was very useful and that the participants agreed that the main causes for the rise of inflation were exogenous factors like gas, energy or oil prices, which have a massive contribution to inflation and are not controlled by neither the government nor the National Bank.

They also agreed that the two institutions to meet more frequently and for the government to meet with BNR representatives before taking any new economic measures, according to Dragnea.