MRM // McCann is the Agency of the Year at Internetics 2016 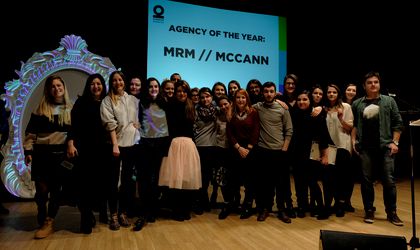 The Agency of the Year Trophy went to MRM//McCann with seven trophies and four nominations during this year’s Internetics Gala that took place on November 21 at the Romanian Athenaeum. In total, 43 trophies were granted during the event: 12 Golds, 24 Silvers and 7 awards in the sections of interactive campaigns.

The 16th edition of Internetics presented by UPC Romania involved the transformation of the competition in Internetics Digital Week, a vast event dedicated to the digital creative industries, taking place in the period November 14-23, at the Stirbei Palace. Internetics Digital Week covers an exhibition and a series of conferences as well as other series of creative events that have the purpose of bringing closer to the public the advertising, technology, IT & gaming industries.

WEBSTYLER added another seven trophies in its portfolio of Internetics awards, for the campaign Gandul – „Romanians Adopt Remainians” (Silver in Viral Non Video and in the section Social Media – Online PR Special Projects and Winner in the Art, Culture, Media and Entertainment section – INTERACTIVE CAMPAIGNS – Full Digital Campaign), „Star Wars Stunt” for Avstore (Silver in Online PR Special Projects), „Instacans” for Coca-Cola (Silver in Mobile Campaigns), „The Epic Call To Arms ” for Banca Transilvania (Winner in the Others section – INTERACTIVE CAMPAIGNS – Digital component of an integrated campaign and Silver in the same sub-category).

Leo Burnett Romania/Publicis One won four Silver trophies: 3 with “TADAAAM” by Telekom – Silver in Online Branded Content (Culture), in Brand Built Communities and in the Social Media Pages section and one with „ABSOLUT Creator” in Digital Brand Experience.

The most awarded campaigns during the Gala were: 1. KFC (with 5 won trophies); 2. The Coca-Cola Company (4 trophies); 3. Mediafax / Telekom Romania / Orange Romania with 3 trophies each.

Moreover, three special distinctions were granted in the gala:

MOST CREATIVE CLIENT OF THE YEAR:  KFC

SPECIAL AWARD offered by The Institute:  iLikeIT – for the promotion of the digital creative industries

In this year’s competition, there were 156 works regisetered by 29 participants with works for 67 brands. The jury was formed of over 30 specialists in marketing and digital and was presided by Ajay Naqvi, country marketing manager at Airbnb India.

„It was a very entertaining jurying process. I don’t recall to ever have to take so difficult decisions during a jurying process until now. The Jurors’ determination of awarding only the best works together with the works’ very high quality standard made it even harder, but full of satisfactions. At the end of this process I fell like a student, because I’ve accumulated a lot: a much better understanding of the bigger brands, as well as the small ones, of the relationship between success and the innovative use of the new media and of Romania and the Romanians. Moreover, I hope that our efforts will contribute to the consolidation of the marketing and advertising industries’ road in Romania and the region,” said Naqvi.

The complete list of winners can be seen here.

The festival was supported by glo iFuse, Coca-Cola, Grolsch and ABSOLUT.