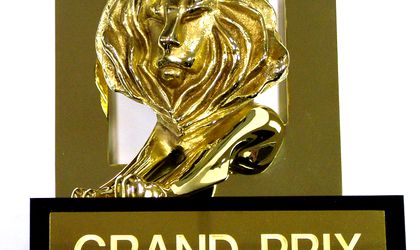 At this year’s edition of the Cannes Lions International Festival of Creativity, McCann Erickson Romania has brought home a total of nine awards for the Rom American campaign, which is the peak reached by a local agency so far. As Adrian Botan, creative director of the agency stated, the local branch of McCann Erickson is the most awarded in the network.

On Saturday, the agency won two more awards, besides its already existent seven gained throughout the week, the Titanium distinction, offered for the most innovative ideas of the festival and a Gold Lion in the Integrated category. As Botan stated, the Titanium award had 10,000 entries from 75 countries and only two more winners, Nike and Volkswagen. The Integrated category came as proof to the 360-degree approach of the campaign, explained Bogdan Enoiu, general manager of the local branch of the agency, a fact also demonstrated by the prizes won by the agency for its media, PR, promotion and direct marketing aspects of its communication.

Thus, in total, McCann Erickson Romania has won two Grands Prixes in the promo/activation and direct categories, two Gold Cannes Lions (for the Food and Non-Alcoholic Drinks category in the Promo&Activation section and the category Fast Moving Consumer Goods in the Direct section), as well as two Bronze trophies in PR, in the Consumer Goods, including FMCG and Household Products and Best Launch or Re-launch categories and a Silver Lion at Media Lions, the Best Use of Integrated Media.

As Enoiu added, this series of awards makes Botan one of the top three creative directors within the global group.

Present at the press conference, Mihut Craciun, general manager at Kandia Dulce, stated that Rom has been on a continuously ascending line since the Rom American campaign (October last year). As he added, although the market has dropped by almost 10 percent at the start of 2011, sales have grown for Rom by 6-7 percent. Thus, Rom continues to rank second in sales after American competitors like Mars or Snickers, a category that continues to be above the Romanian bar by around two percent (even though, as he added, they sometimes become equal). Last year, as Craciun stated, Kandia Dulce reached a turnover of EUR 25 million.

The most important success of the Rom American campaign was the fact that it doubled its young consumers. A new campaign is being prepared for the end of this year and the Romanian target continues to be the most important for Kandia Dulce, although it will surely extend to other countries in the future (besides Bulgaria, Hungary, Italy, Spain, countries were there is an important Romanian minority).

The Grands Prixes won by Mccann Erickson Romania were the first for Romania, though it has won a few Lions in the past. More on the winning Rom American campaign here.

The Rom American television spot was directed by Radu Munteanu, a well-known Romanian director of the New Wave (more information on one of his films, Tuesday After Christmas, here).