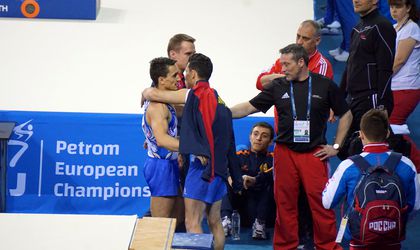 The most awarded Romanian gymnast in the history, Marian Dragulescu succeeded in qualifying in the floor finals, with 14,666 points, that brought him the second score in the qualifying rounds at the apparatus. Moreover, he received the biggest score at vault, the final score after the two jumps being of 14,666 points.

Marian Dragulescu received at last year’s European Championships two Silver medals: one in floor and one in vault.

He is the only Romanian from the men team to qualify in the finals, the other five Romanians didn’t succeeding: Cristian Bataga, Vlad Cotuna, Adelin Kotrong, Andrei Ursache and Laurentiu Nistor. Moreover, none of the Romanians will take part in the men-all around final, as they didn’t have exercises in all six apparatus.

The 7th European Individual Artistic Gymnastics Championships are going on at the Polyvalent Hall in the Romanian northwestern city of Cluj-Napoca 60 years after Romania hosted the competition for the first time. Competing will be 274 gymnasts, 168 in men’s events and 106 in women’s events, hailing from 37 countries.