MAE confirms there are no Romanian among Manchester attack victims 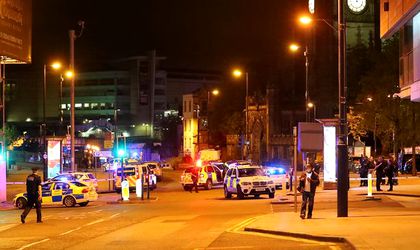 According to the latest data provided by the Romanian Ministry of Foreign Affairs (MAE), there are no Romanians among the victims of the Manchester bomb attack, which killed 22 on Monday evening.

The ministry is carrying out an investigation, which is not proceeding smoothly. “As soon as we have new conclusions, we will communicate them to you,” MAE spokesperson Paul Ciocoiu told broadcaster Antena 3.

“All of our thoughts go to the families of those who lost their lives and towards those injured after the Manchester explosion,” Romanian PM Sorin Grindeanu wrote on Facebook on Tuesday.

In a press statement sent to Agerpres, the MAE expresses its solidarity with the British people and informs that the Romanian diplomatic mission has requested information on the circumstances surrounding the incident and on the nationalities of the victims. MAE said it expresses “profound regret and condolences for the loss of many lives as well as its full hope for the fast recovery of those injured after the strong blast that took place on Monday.”

The blast hit the area near Manchester Arena at the end of a concert by US artist Ariana Grande. According to preliminary information released by the police, the attack was carried out by a suicide bomber.